What is Integrated Circuit | Types and Usage s

Integrated Circuit or IC is one such small electronic device. In which resistors, capeciter and mainly transistors etc. Remains fabricated.  Or a small chip or small piece of silicon on which these electronic components are embedded. IC is called integrated circuit. 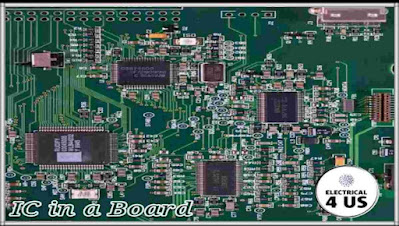 IC in a board

Most electronic components contain silicon ie semiconductor material. IC is also in these, after the arrival of IC after the transistors, the circuits improved a lot. The number of transistors increased in less space. An IC has more than 10 to 1000000 transistors.

Who first invented IC. After this, how did IC start to work with time. And how did it get better.  Which had SSI, MSI, LSI, VLSI, ULSI IC. And how it became the biggest invention of the 21th century. Types of Integrated Circuit according to their work in which Digital IC, Analog IC, mixed IC, Programmable IC, Timer IC, Comprator, Switching IC are on this page.

How IC was invented

IC is considered as the form of many transistors. When William B. Sockley created Transistors in 1947. That idea had arrived at that time. Many electronic components should be integrated in one place. Many small transistors named IC Integrated Circuit.

In 1949, Werner Jacobi, a German engineer, integrated five transistors together. He also found it cheaper for his amplifier. This was the beginning, which was better than different transistors.
Then in 1952-53 applied for the patent of a prototype IC from Harvik johnson. After that, work on jack kilby and noyce IC came out.

Jack kilby did a lot of work on IC and he worked on integrating components better. Jack patented the principles and methods of integrating kilby components. Then Jack Kilby was given the Noble Award in 2000 after much further work.  In fact, we cannot say who invented the IC, all had their own good contribution.

These ICs were simple according to which they all made themselves, but today's IC has billions of electronic components. Like an Android phone processor that takes too much input at a time.  Processes then returns the output.

IC started to be used on a large scale from 1964 when the basic method of Integration was used.
These transistors used to make 1-12 logic gates, it was made by hand.
It was named as Small scale Integration i.e. SSi in which 2 to 10 transistors were used.

MSI i.e. Medium Scale Integration in 1968. Which a good way to integrate 10 to 500 transistors simultaneously.
In this, 13 to 99 logic gates were made.
With the use of MSI, things became much easier.

Large Scale Integration System It was developed in 1971. It used 500 to 20000 transistors simultaneously. A large circuit was replaced by a small chip.
The number of logic gates in the LSI ranged from 100 to 9999. From here it became easy to make computers personal computers.

Ultra Large Scale Integration i.e. ULSI it started in 1984.  The technology to replace more than 1000000 transistors in ULSI was developed.
In this, the number of logic gates also exceeded 1000000. Which is still used in any high tech device. Laptop, touch screen mobile etc.

It is an IC that continuously works on a single signal.  It gives signals from zero to full voltage.
It is such a device, such as a microphone.  Which converts sound into electrical signal. An analog IC liner is used in designing regulators, oscillators, operational amplifiers etc.
NE 555 Timer IC and sensors like LM35 etc.

It was also used in analog computers. Such as for performing mathematical operations.

ICs operating on binary numbers 1 and 0 are digital ICs. There are lots of logic gates in it.  Through which IC gets output. In the form of 1 and 0, 1 means High is a signal and 0 means Low is not a signal.
They depend on 1 and 0 inputs.Today's microcontrollers and microprocessors work on these.

ICs that are made in such a way that it can work in both Digital IC and Analog IC.
Use of mixed IC such as converting analog signal into digital signal. And converting Digital Signals to analog.

This programmable IC works with microcontrollers. These ICs can be programmed according to their needs.
Getting the inputs from the sensors to be printed on the display or beep in a buzzer. It can do all programmable ICs which are inbuilt in the micro controller.

It takes care of time in IC Circuits. Like what to do after time. Time count is like a stopwatch which can use Time in any way.
Like SE this is NE 555 IC this is Universal IC.  Which was invented in 1970. It is a monolithic IC. The NE 555 IC is given current between 5V and 18V.

Timer IC can operate at a temperature of 70 ℃.  It has 8 pins. Which is GND, VCC, Trigger, Discharge, Output, Threshold, Reset and Control Voltage pins.

Comprator IC This is one such Integrated Circuit. Which compares the input signals.
It compares multiple input signals and then determines the output.

This is one such IC. Which works as a power supply or signal supply in different parts of the entire circuit. A Switching IC performs many switches.